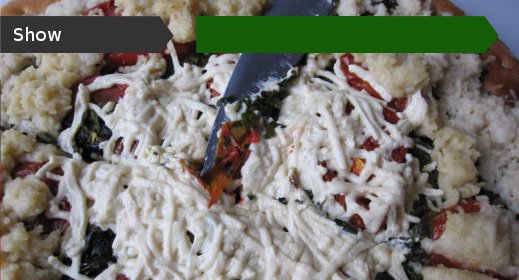 What is the secret of making cheese without dairy that stretches and melts?

Is there a cheese addiction?

What’s the past, present, and future of vegan cheese?

And if you brought together the leading vegan cheeses from Europe and the Americas – like Redwoods Cheezly, Vegusto, and Daiya – that aren’t meant to be available in the same country, let alone the same pizza – who would win?

Spoiler warning: the results of the taste test are below the fold.

Neal Barnard summarises the case for regarding cheese as a narcotic 2003 article in PCRM Good Medicine Magazine, Breaking the Food Seduction:

At first, the researchers theorized that it must have come from the cows’ diets. After all, morphine used in hospitals comes from poppies and is also produced naturally by a few other plants that the cows might have been eating. But it turns out that cows actually produce it within their bodies, just as poppies do. Traces of morphine, along with codeine and other opiates, are apparently produced in cows’ livers and can end up in their milk.

But that was only the beginning, as other researchers soon found. Cow’s milk—or the milk of any other species, for that matter—contains a protein called casein that breaks apart during digestion to release a whole host of opiates called casomorphins. A cup of cow’s milk contains about six grams of casein. Skim milk contains a bit more, and casein is concentrated in the production of cheese.

Traces seem unlikely to have a psychoactive affect, so we did not mention morphine or codeine in the show.

Casomorphins, on the other hand, are real and unambiguous; Diana examined the literature, discussed them in the show, and will also blog about them shortly.

I followed a recipe for vegan cheese taken from a 1985 update of “What’s Cooking” by Eva Batt (1973), and you can see Diana posing with the 1980s vegan cheese. The recipe – soy flour, soy margarine, and yeast extract – represents the era more than it does Eva.

Eva Batt played a leading role in British veganism in the sixties, seventies, and eighties, including the “Open Door” film mentioned in our Born Vegan show and, of course, cookbooks.

How to Make Vegan Cheese Stretch

I sent interview requests to half a dozen companies, including Daiya and Redwoods, and was glad to speak with Mark, the Director of Vegusto UK, to hear his views on where the analogue food movement is going. Though it didn’t get a mention in the show, he’s vegan.

We chose Redwoods Super Melting Cheezly (from the English Midlands, owned by Heather Mills) as the best UK melting vegan cheese, and Daiya Mozzarella style shreds as Diana’s favourite in the US.

London Vegan boutique Vx had recently recommended the new Vegusto No-Moo Melty, so we added that too.

This took place in May 2011; so this show was over a year in the making.

Diana made two pizzas on storebought crust- tomato mushroom and spinach pesto, and I added the cheese in three concentric circles. From inside to outside, I put Redwoods Cheezly, Vegusto, and Daiya on one pizza and reversing the order on the other pizza. It’s important to be fair. All ten guests scored the pizzas out of 10. Let no-one tell me I don’t know how to party.

Use vegan cheese as a seasoning rather than a bulk ingredient, particularly with those who eat dairy cheese. Don’t forget flavour. It’s steadily getting better – this unknown cheese from Switzerland is actually reasonably good, and the Daiya Jack Style Wedge went down well with Diana’s mother and her husband.

Diana mentioned Gwendolyn Mather’s third prize with a vegan Daiya/Tofutti sandwich in the Grilled Cheese Invitational; Gwendolyn blogged about this for Compassion over Killing.

Our thanks go to Robb Masters (who coincidentally reviewed vegan cheese for the London Vegan Campaigns vegan pledge) for the music, to our friends at the garden party for tolerating the taste test, and to Mark Galvin and Jonathan Gordon for talking with me.

And to the people who make vegan cheese. I still like it.