Cats: Can they be vegan? With vets Lorelei Wakefield, Andrew Knight, and Jean Hofve; and special guest Erin Red 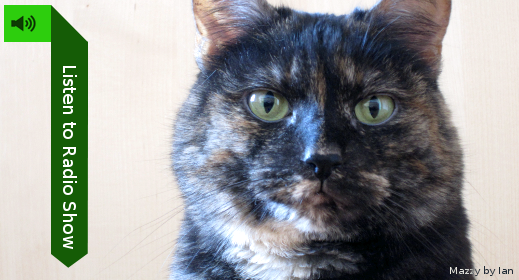 Cats: Can they be vegan?

Three experienced veterinarians with experience of vegan cats say whether and why they think cats can thrive on a vegan diet.

Andrew Knight advocates a vegan diet for cats – if you do it right.

Only Lorelei Wakefield has published a peer-reviewed study to try to discover who is right.

She does housecalls in NYC, and her site is ComfortsOfHomeVet.com.

Lorelei is vegan. Her own cat, Noel, used to be vegan but is now on a meat-based prescription food.

Jean Hofve is a retired veterinarian with an interest in nutrition and alternative veterinary medicine.

She writes at Little Big Cat .com, including about vegetarian cats.

She’s Canadian transplanted to Brooklyn, where she co-founded “The Seed: a vegan experience”, and practices muay Thai.

Erin can be found at Tumblr (currently), ErinRed.com (under construction), and@ErinRed on Twitter.

She discussed the ethical dilemma of vegan cats with Prof Gary Francione in a February 2012 episode of Red Radio.

Mazzy is a female tortoiseshell rescue cat, and she’s on my lap as I’m typing this.

David Dzanis wrote in the Veterinarian Newsletter in 1999, concluding of both dogs and cats:

… while both species can eat and utilize some plant-source ingredients (dogs more than cats), they simply are not intended to eat only plants as are other animals such as cattle and sheep.

The American Society for the Prevention of Cruelty to Animals said [in an “Ask the Experts” column that, as of 2018, is missing from their website]):

When it comes to felines, it really is best to provide a diet that includes meat.

That US National Research Council released dietary guidelines for Cats and Dogs in 2003 (before Lorelei Wakefield’s study) saying that cats:

should not be fed a vegetarian diet because it could result in harmful deficiencies of certain amino acids, fatty acids, and vitamins

The show specifically discussed how cats need Taurine and B12; and the dangers of urinary struvite crystals.

Colleen Patrick-Goudreau addressed the issue in her 2007 podcast episode, What do Vegetarians Feed their Dogs and Cats? – and, as I mentioned, feeds her cats meat.

US writer and activist Jo Stepaniak blogged about how she feeds her cats meat after they did not thrive on a vegan diet.

Vegan vet Armaiti May advises having a vet monitor your cat’s urine pH, rather than doing it yourself.

Animal Voices (Toronto) covered this topic in 2006 with a round table discussion, involving two local activists whose cats fell seriously ill on a vegan diet, as well as Eric Wiseman of Evolution pet food.

… go to Robb Masters for the music, the three veterinarians for our interviewees, and of course Erin Red.

The interview with Andrew Knight is from back in 2010, hence some rookie mic handling noise.

Next show: Cats, the ethical quandary, and the criminal vegan pet food CEO

10 responses to “Cats: Can they be vegan? With vets Lorelei Wakefield, Andrew Knight, and Jean Hofve; and special guest Erin Red”