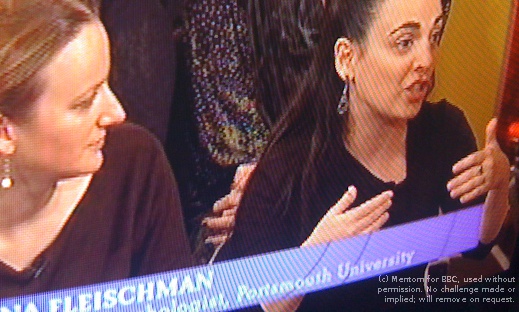 Last Sunday and next Sunday, I’m appearing on “The Big Questions”, a BBC TV show where the audience discuss the big ethical issues of the day. In this case, whether we should all repent now it’s 2012 (of great interest to Jordan Wyatt), and if there is any evidence for God.

Not only do I further expand my multimedia empire, but I do manage to sneak in a less human-centric world view – explaining the evolutionary origins of altruism and how many other animals including ants have a code of conduct that can be described as altruistic.

If you’re in the UK, you can catch me on BBC iPlayer for 7 days after broadcast. The shows are an hour long. You can (until Sunday morning) see me in the last 10 minutes of the first show, but I don’t yet know how I’ve been edited for the show this Sunday (the 15th).

But I must say, competing with everyone on “The Big Questions” isn’t as hard discussing the topic of upcoming shows with Ian!

Dr Diana Fleischman co-hosted the show in 2011 and 2012, supplying some American irreverence. Media appearances include discussing atheism on BBC TV's "The Big Questions" and her research on the BBC World Service. She lectures in comparative psychology (the evolution of the mind) at the University of Portsmouth.
View all posts by Diana Fleischman »
« Previous post
Next post »

3 responses to “Diana on UK TV”