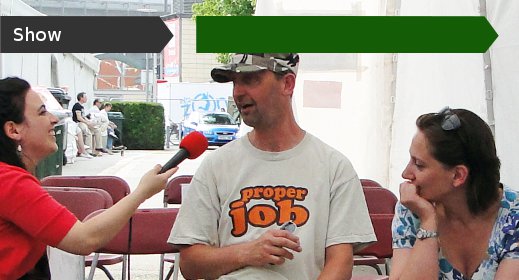 We took the show on the road to VegfestUK to find out how parents met the challenges of raising children vegan in a non-vegan world. What do they tell their children about how the rest of the world treats animals?

Ian tracked down Mair Perkins from her entry in an old pamphlet of vegan case histories, and talked to Ruby Roth, who has defended her children’s book “Vegan is Love” on US Networks from Fox to NBC.

Diana talked with Lauren and her parents when they came to our recording of the show at VegfestUK Bristol.

Ruby Roth is the author of This is Why We Don’t Eat Animals and Vegan is Love, as well as an illustrator (NSFW) of liberated womanhood and hip-hop.

She has made her case and defended her book across TV and newspapers internationally. She’s also been on many animal issues shows: Animal Voices Vancouver; All Things Vegan Radio (Oregon, USA); AR Zone (discussing feminism, and socialisation), and Sentients (KZFR, California, USA).

The organisers of VegfestUK in Bristol say it’s the world’s largest vegan event with 25,000 visitors. It’s a showcase of vegan wares, with live music drawing the omnivorous punters in.

They also run the VegfestUK awards. We were very grateful to be nominated in the “best vegan media publication or website” category.

We didn’t win, but if thousands of votes have been cast then to get 7% of them, despite being such a new show, is extremely humbling.

Plamil was set up in 1960’s Britain to produce a “plant milk” alternative to dairy. Being a vegan company, they also published some vegan pamphlets and tried to help support vegan parents.

They published Vegan Infants Case Histories, which combined the experience of parents with pages by a GP and a dietician.

The company is now run by the late founder’s son, Adrian Ling, and produces a range of vegan confections and dairy alternatives.

Mair Perkins, who featured in the case histories, is also an artist; an animator and illustrator, her video won first prize in the 2008 Design against Fur competition.

Our thanks go to Robb Masters for the music, and to Mair Perkins, Ruby Roth, and Lauren and her parents for their time.

Because we took over a talks session at the festival to run our show in a tent, we relied on much more help than usual. Our thanks to Tim of VegfestUK and the staff of BES for help and information about the sound system so that I could prepare our setup; and Petrina Butler (formerly of WZBC) and Kevin Butler for helping so much with setup and organisation of our recording. As you can probably hear, I was struck down with a cold that weekend, so all help was very much appreciated.

Our thanks particularly go to the audience for turning up and helping us make the show. I’m more grateful to Diana than usual for going through with the ambitious plan to record at VegfestUK.

(Production footnote: I added the music in post-production, but I think that’s obvious.)

2 responses to “Born Vegan at Vegfest UK, with Ruby Roth, Mair Perkins, and a studio audience”