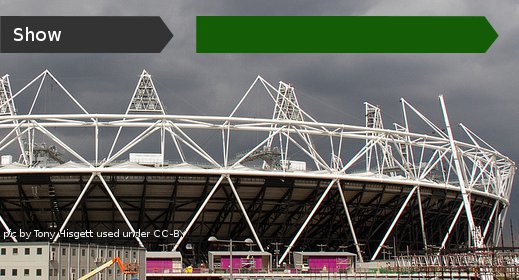 Athletes from across the world are coming to East London – where we produce the show – but what are the vegan perspectives on the Olympic games?

Venus Williams and Serena Williams represent the US at Tennis.

Venus has Sjögrens syndrome. You can see her discuss her raw vegan diet on CBS (Jul 10);  she called herself a chegan (“cheating vegan”) in a press conferences, reports Tennis Panorama.

Some vegans say that her sister, Serena, with whom she won the Wimbledon Ladies Doubles title, is also vegan; Celeb Buzz quotes her as saying that she won’t eat chicken at home with Venus.

The publicist told me that:

Serena’s diet is more “Raw” then “Vegan” although it is quite close.

Pam Boteler, American canoeist, is raw vegan – but only men’s sprint canoe is an Olympic sport

James Southwood is one of the world’s leading Savateurs – French kickboxers – as well as being a former marketing officer for the UK Vegan Society. Paris was a close second for hosting the 2012 games, and would likely have added Savate as at least a demonstration event, as it did in 1924.

An already-Olympian we didn’t mention is Kara Lang, Canada, Football/Soccer – who competed in Beijing (2008) but was prevented from competing this year by an injury.  She’s in London as a journalist.

Diana suggested athletes you might want to cheer on the basis of their vegan sponsors rather than their flag:

Sandra Hood has spoken for the UK Vegan Society on diet issues, and wrote Feeding Your Vegan Infant with Confidence. The Olympic Torch Relay page on Sandra Hood has more information about her work on diabetes.

We discussed the Chinese volleyball team, whose complaints have been mentioned by NPR’s The Salt (who mentioned they were on the road without access to untainted meat) and The Guardian (who reported that they were only avoiding pork, whilst eating fish and “protein powder”).

I did not mention that the additive Clenbuterol is also unlawful. In 2009, over 70 people in China fell ill after eating Pork contaminated with Clenbuterol.

Animals at the Opening Ceremony

You can read more about that story at:

The calculation of 20,000 chickens being eaten was based on the quantity of poultry mentioned in the LOCOG Factpack, assumptions that this was from birds of the same weights and proportions as 2010 UK production of carcasses and that 85% of a carcass is, ethics notwithstanding, edible.

We recorded the show on Friday afternoon and uploaded it (without show notes) as the opening ceremony was beginning.

Frys’ Veggiemince at the Olympics

I visted Frys Distribution, who import from family business Frys Vegetarian in South Africa. Because some will want to know, of the voices you heard, Lisa is vegan, Pat is almost, and Kevin is omnie.

Our thanks go to Robb Masters for the music, to Sandra Hood and to Fry’s and Pogocafe for their time.